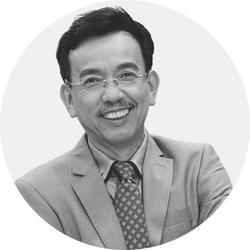 David Duong is a successful American entrepreneur, business owner/operator and philanthropist who arrived in the United States with his family in 1979, having emigrated from Vietnam after the fall of Saigon in 1975. While his younger siblings went to school during the day, David worked during the day and went to school at night to learn English.  David and his family found opportunity and profit by recycling paper, metal, and plastics from solid waste in the early 1980s.

The Duong family began recycling in San Francisco’s Financial District by separating high-quality office paper from trash.  Within a short time, the Duong’s expanded with collection vehicles, then a warehouse, then machinery for consolidating loads.  In 1983, David established his first company named CoGiDo Recycling, in Oakland.  It sold and brokered large quantities of recycled materials to domestic and Asian markets.  David enabled other entrepreneurs to build their own recycling businesses by selling and buying with CoGiDo.  Within a decade CoGiDo was sold to a national waste company, and David became its General Manager.

California Waste Solutions now operates six facilities in the Bay Area and is a continuously growing enterprise.  CWS has three state-of-the-art recycling processing facilities and serves greater than 1.4M customers with a 100 truck fleet fueled by clean CNG and bio-diesel, each equipped with GPS, internet, and cameras that increase safety, efficiency and customer satisfaction.  The CWS recycling facilities are being continually upgraded to handle greater quantities and types of materials to recycle and will apply the highest computer and AI-assisted sorting technologies that will further improve product quality, efficiency, environmental compliance and worker safety.

In 2005, David was awarded a fifty-year contract to design, construct and operate the first integrated solid waste management facility for Ho Chi Minh City (Saigon), Vietnam.  It is wholly owned by CWS and it is the first and only integrated solid waste facility in Southeast Asia and it is the largest landfill operation in Vietnam.  The Da Phuoc Integrated Solid Waste Facility (DPI) includes a Sanitary Landfill began operating in 2007 and now receives greater than 6,500 tons per day and operates at US EPA standards.

In the San Francisco Bay Area, David began the Vietnamese American Business Association (VABA).  The mission of VABA is to strengthen the collaboration among Vietnamese, other Asian, and non-Asian leaders in business, government, labor and academics.  VABA expanded to southern California and beyond California.  It has established strengthening links between people in the USA and Vietnam, for products and services marketed between both continents, North America, and Asia.