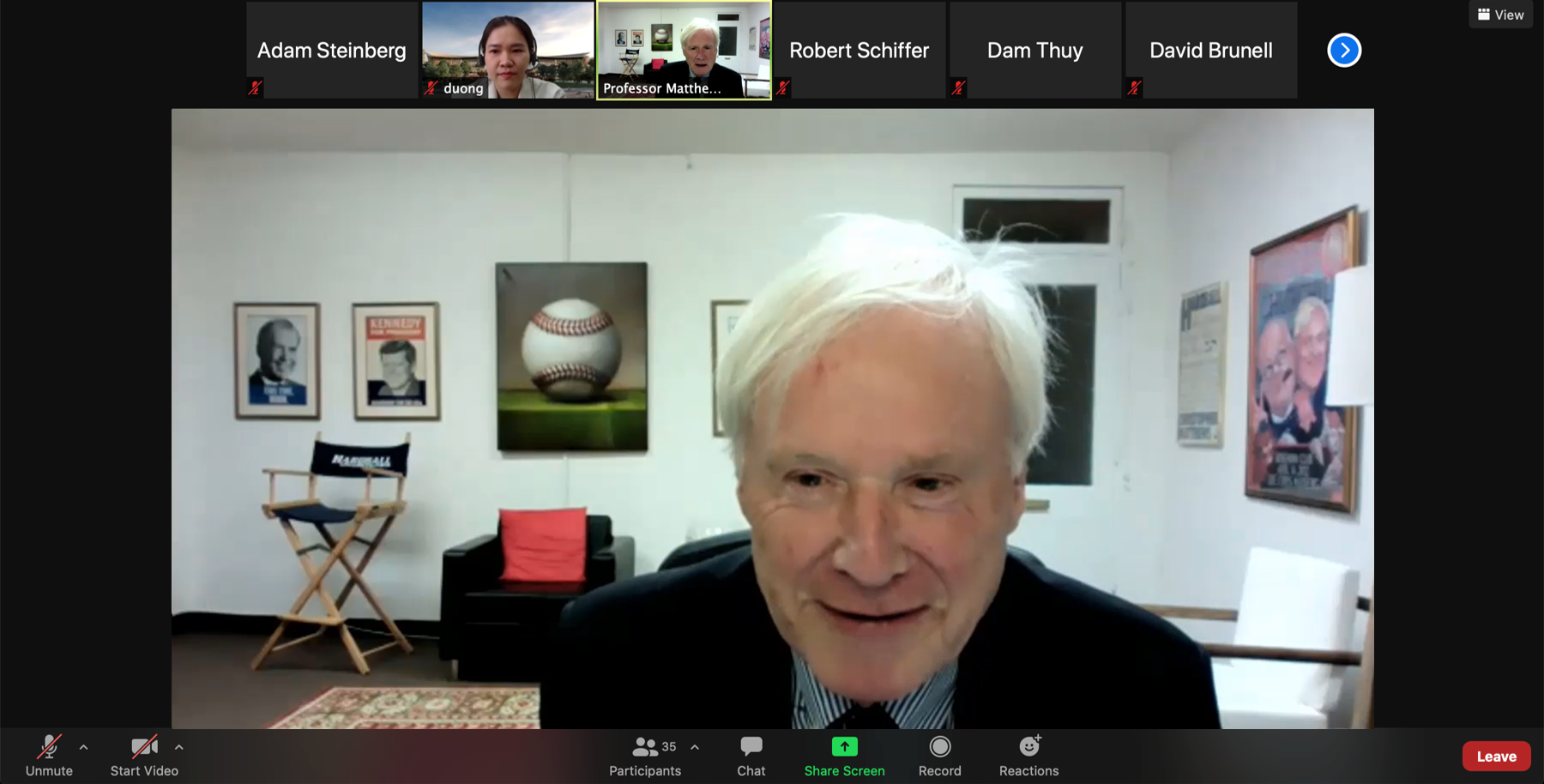 Last month, Chris Matthews, an American veteran political commentator has dedicated his time to share his in-depth knowledge accrued over a decades-long career in politics and journalism. He is known for being an award-winning journalist, author of multiple books, and most recently the host of Hardball with Chris Matthews, one of MSNBC’s longest weeknight talk shows. As Fulbright’s Honorary Visiting Professor, Matthews came prepared with highly selective content and high-profile guest lecturers to deliver a one-of-a-kind course on American Political Communications.

As Covid-19 has disrupted the normalcy of day-to-day functions everywhere in the world, education is not an exception. However, seeing past the challenges that the pandemic has imposed, the silver lining is that people have now learned to utilize technology to connect and make great use out of virtual learning platforms.

This course is also a proud product of such committed efforts, playing to technology’s advantage to connect students with experts in the field, disrupting the inherent limitations of the usual on-campus students’ networks. Chris Matthews calls it “closing-the-distance” learning for the course’s nature in bridging Vietnamese students to professionals across the globe. Throughout the course, Matthews has invited distinguished practitioners in the industry to discuss various topics, explores the role of media in politics with a particular focus on how mass media and social media influence people’s attitudes, beliefs, and behaviors.

When asked to share about the learning experience, Nguyen Quang Minh (Class of 2024) confessed: “I was hesitant to enroll in an online course because I thought it would just be lectures and assignments. However, this course absolutely exceeded my expectations – Professor Matthews and all the guest lecturers were surprisingly down-to-earth despite their high profiles. They created an environment so welcoming that sometimes I forgot that all of it is happening via a screen.”

Similarly, Nguyen Vu Tung Lam (Class of 2024) reflected: “The experience was less like a class but more of a personal, cozy get-together as if we were hanging out in Chris Matthews’ living room or backyard. To me, it was like the professor invited his friends over for a coffee chat and we were just glad to join in that conversation. The beautiful thing about this is that they did not filter out or give us a curated version of that talk like people normally do in the media. They were very willing to openly share with us, a small community at Fulbright, the talk that supposedly only happened between themselves.”

The course started with a conversation on the notable event on January 6th with Howard Fineman (Global Editorial Director at The Huffington Post) and Margaret Carlson (a noted American journalist and TV commentator) to catch the students up on American current political scene. Then Chris Matthews took them back in time to the very beginning, discussing Thomas Paine’s “Common Sense” with Jon Meacham (Pulitzer Prize-winning biographer) to study the history of political communications and how it has progressed to what we see on social media nowadays.

Within just ten classes, the course touched on diverse substantive topics, ranging from micro level to structural phenomena. For instance, Frank Fahrenkopf (Chair of the Commission on Presidential Debates) and Fred Yang (CEO of Hart Research Associates) joined the class to talk about American debate culture and how it could sway an election.

Chris also invited his fellows from the “Hardball days” – Joy-Ann Reid (political analyst for MSNBC), Yamiche Alcindor (White House correspondent), Jonathan Allen (No.1 New York Times bestselling author), and former “Hardball” Executive Producer Ann Klenk – in to chat about the news and how it was produced. Joe Scarborough (host of “Morning Joe”, a top news program ranked by The New York Times) also came in to speak about the nature of morning news and how it sets the agenda for every day’s conversation.

To examine political advertisement, Chris brought in his teaching assistant Katie Cunningham, who was the communications/social media staff from US Senator Ed Markey’s 2020 campaign, Steve McMahon, a noted Democratic media consultant, and Gerald Rafshoon, the producer and political operative whose TV ads were credited with bringing Jimmy Carter to the White House.

“Do not let your pillow get too hot on one side!”

Coming from varied backgrounds of expertise, the guest lecturers provided a whole spectrum of diverse opinions. And yet, a recurring buzzword in all sessions was “echo-chamber” when it comes to contemporary analysis on the news media. In particular, the unprecedented proliferation of news sources on the internet and social media has made it possible for citizens to expose themselves to an extremely large array of viewpoints. At the same time, it has also given rise to closed ecosystems of groups with homogeneous views – often sealed off from one another.

As shared in a Public Talk at Fulbright University Vietnam in 2019, Chris Matthews stressed the importance of having an open yet critical mindset when perceiving information today to avoid echo chambers. “Listen and read from different perspectives. Like when you sleep and you can feel the heat lingering on your pillow, try turning it over, maybe the other side will be cooler and more comfortable. It’s that simple, but it’s your chance to see everything correctly.”

The problem is, as scholars have pointed out, the ability to listen from diverse aspects, to selectively obtain information with analysis does not just come out of thin air, but rather must be fostered every day through education. This is also the reason Fulbright pursues a liberal education model, with a focus on fostering critical thinking for students from the very first days, helping them hone their abilities for multi-dimensional thinking, analyzing, and evaluating based on evidence and reasoning.

Do Hoang Cam Hoa (Class of 2024) concurred: “In just a month of the accelerated course, I was able to acquire a tremendous amount of knowledge, looking at the issues via the lens of insiders, the top elite and most influential figures not only in America but also around the world. I believe there is no other way for us to get such truthful insights from the leaders elsewhere.”

Having met Chris Matthews when he visited Fulbright during the Co-design year, Phan Hoang Dung (Class of 2023) immediately applied for the course not only because of the intriguing topics but also because he knew how knowledgeable the professor is. Since the course is a non-credit elective, students truly exercised their “learning for the sake of learning” mindset. When grades are removed from the equation to people’s surprise, students did not slack off but showed their genuine inquisitiveness and curiosity.

Many students reflected that the course allowed them to peek into the American political system via a special channel. “Being able to connect with people with real-life experience, who know the system very well, is an invaluable opportunity. It was like having access to primary resources instead of just reading about it from somewhere,” Quang Minh compared.

After a decades-long career in politics and journalism, Chris Matthews was excited about this educational experience with students from halfway across the globe. He shared that he was surprised at the students’ attunement to American topics, and he was glad to get some “hardball” questions from Fulbright students. “Teaching these classes to Vietnamese students, with fellow Americans, has been an education in itself.”

Ms. Dam Bich Thuy, President of Fulbright University Vietnam, affirmed that this special course offered students a wonderful opportunity to learn from the internationally leading experts in the field, which will help them to broaden their horizon and further their essential skills to stay adaptive in an evolving integrated and changing world.

Chris Matthews’ course truly reinforces the multi-disciplinary nature of Fulbright, where it helps students connect the dots between different subjects. To Quang Minh, the course is a well-mixed combo of Political Science, Communications, Psychology, and Anthropology, which synthesizes his brain to constantly reflect and update his perspective. To Tung Lam, the course offers him a map to help navigate through the complication and the vast amount of knowledge available out there in the world. Hoang Dung and Cam Hoa expressed that the course has inspired them to further probe their interest in speech writing. Although each student would have different takeaways from the course, one common belief that they all share is the spirit of liberal arts education – the willingness to go above and beyond the usual programs to explore both breadth and depth of knowledge.