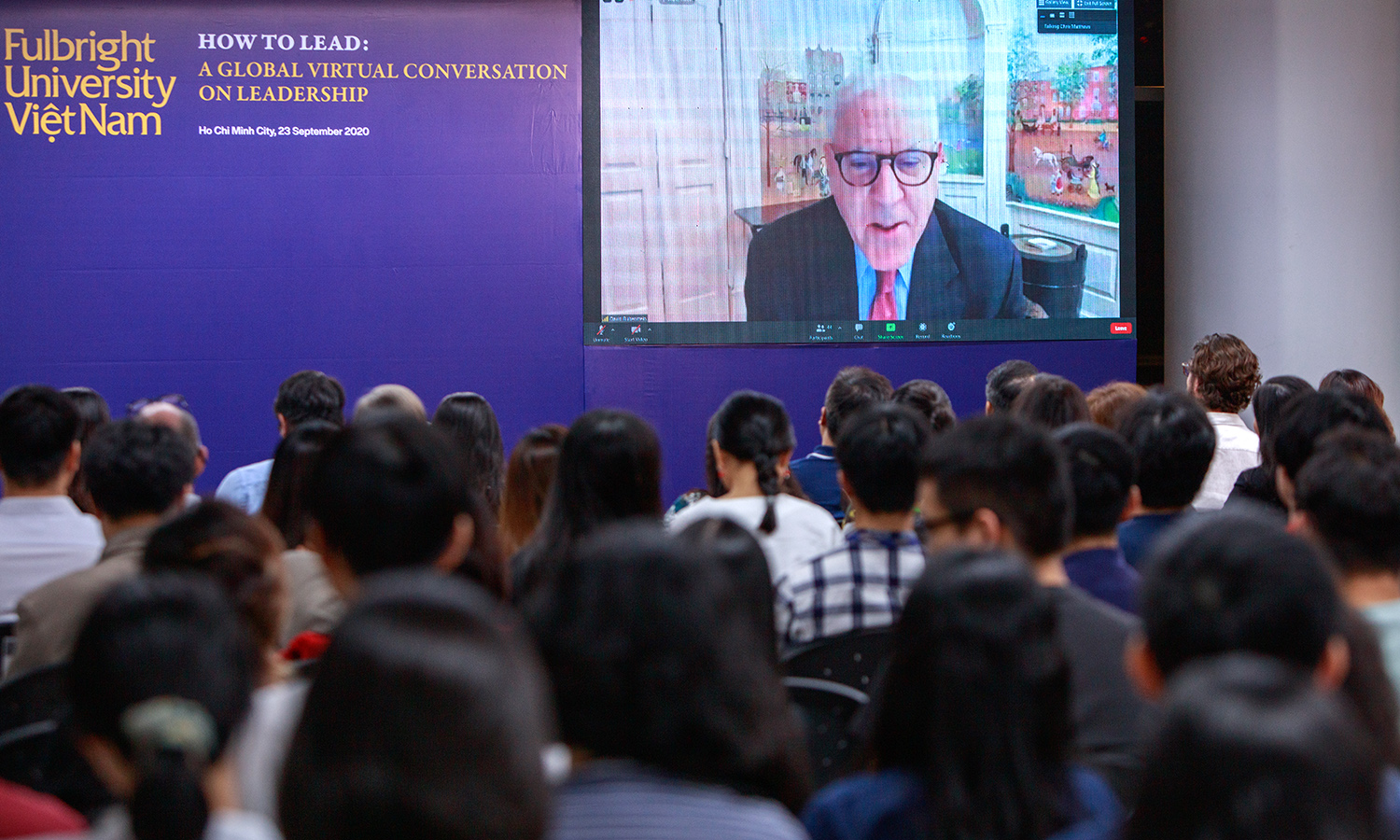 He was joined online by a famous moderator, American political commentator and journalist Chris Matthews, contributor to MSNBC and former host of Hardball with Chris Matthews, to discuss Rubenstein’s latest book How To Lead: Wisdom from the World’s Greatest CEOs, Founders, and Game Changers. Mr. Rubenstein fielded questions from undergraduate students and graduates of Fulbright School of Public Policy and Management (FSPPM), the first academic unit at Fulbright.

What makes a great leader? How can leadership be developed into a force for true achievement? Mr. Rubenstein, Co-Founder and Co-Executive Chairman of The Carlyle Group, a global investment firm based in Washington, DC, compiled notable answers to these fundamental questions from highly influential contemporary figures, such as Bill Gates, Jeff Bezos, Warren Buffett, Bill Clinton, George W. Bush, and Condoleezza Rice.

The book comprises select conversations recorded from Mr. Rubenstein’s role as an interviewer in which he explores successful leadership through personal interviews with globally influential figures.

Mr. Rubenstein’s answers to the thoughtful questions from Fulbright and FSPPM students, who had read the book in anticipation to the event, were further accompanied by his personal insight and experience with the highly influential figures mentioned, and his own lessons learnt as a successful leader.

“There are over seven and a half billion people on the face of the earth. And you know, most of them are followers. So why don’t you just be a follower and have a nice, easy life?” he asked the audience.

For the entrepreneur and philanthropist, the main benefit of being a leader is the ability to do something useful with their life: to lead people is to incite others in working together to making their lives better, and thus to make the world a better place.

“I like to remind everybody that we’re only on this earth for a relatively short period of time. And you can walk through life and do nothing. But I think your life will be more enjoyable if you do something to help other people, and you do that by becoming a leader rather than a follower,” he stressed.

That message also echoes with Fulbright’s values, and a major criterion in selecting new students each year: Pioneering spirit, and Leadership qualities. Fostering the leaders of tomorrow is indeed a principal endeavor at Fulbright. Recently, Assistant Secretary of State for East Asian and Pacific Affairs David Stilwell announced that the U.S. Department of State intended to provide $5 million to establish the Young Southeast Asian Leaders Initiative (YSEALI) Academy here at Fulbright, based on the U.S. government’s signature YSEALI program aiming to improve the education and skills of future leaders from all 10 ASEAN member states and Timor-Leste.

As Fulbright President Dam Bich Thuy remarked during the virtual conversation with Rubenstein: “It is a great opportunity for the young people of Vietnam and of Fulbright to hear from Mr. Rubenstein about leadership, something they will very soon need to guide Vietnam, and then the world to become a better place.” 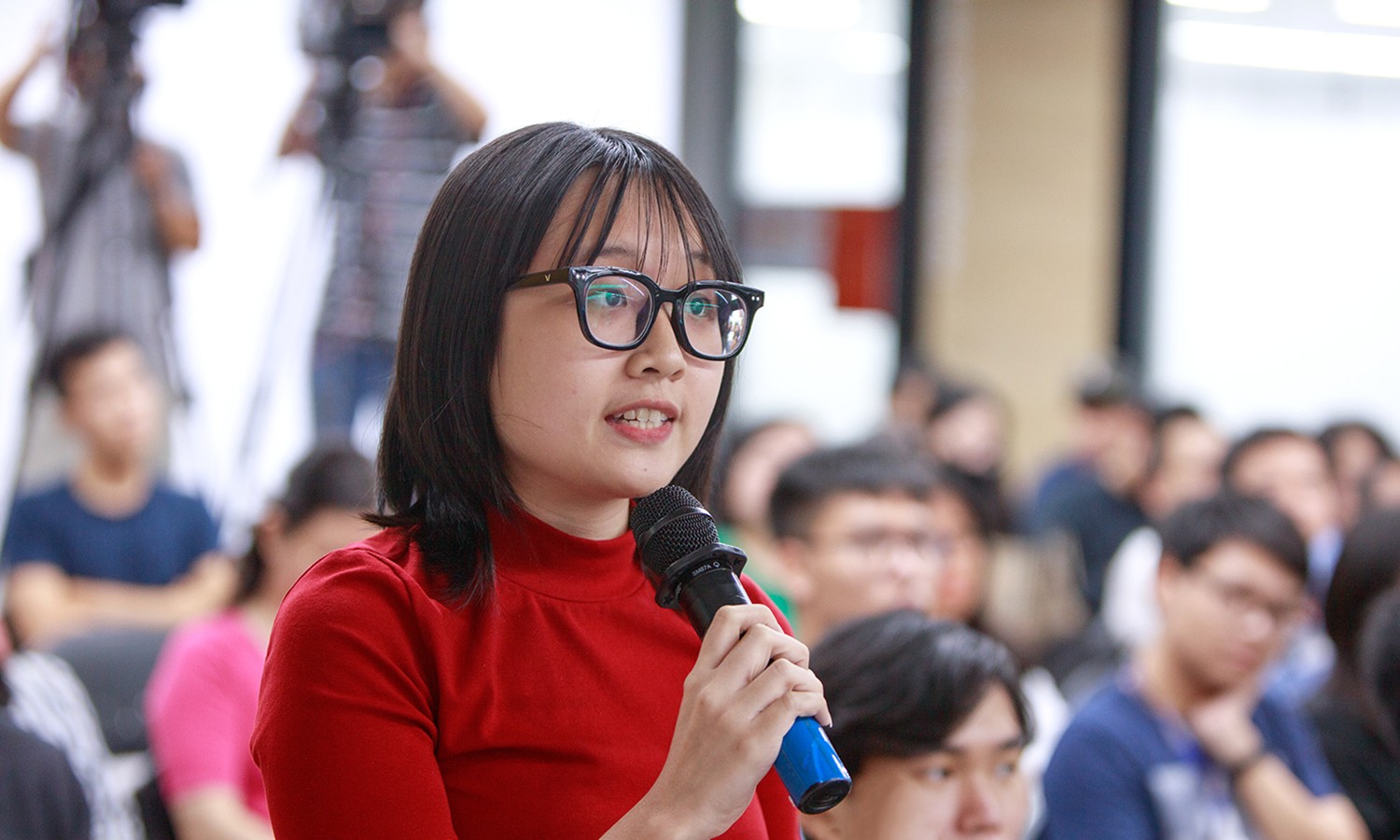 What makes a great leader?

From the success stories of globally influential people and from his own experience, Rubenstein recognizes education as the most important force driving a young person’s self-improvement. Rubenstein himself was not born into a wealthy family. He studied hard to obtain scholarships to Duke University and the University of Chicago Law School. He worked as a lawyer before becoming highly successful in his career. To pay it forward, Mr. Rubenstein invests back into universities and spends as much time as he can on education, among other philanthropic endeavors. He now serves or has served as a board member of many leading universities in the world, including Harvard University, Duke University, and the University of Chicago.

“I believe education is the key to one’s success. If you’re well educated, I think you can do really good things in life,” he emphasized.

But he also reaffirmed that academic success is not the only factor at play to guarantee success in life. Working hard is another factor.

“There’s nothing more likely to get you ahead in the world than hard work. If you work nine to five, five days a week, you’ll probably have a nice life. In many respects, you’re not likely to be that successful,” he asserted.

What he learnt generally is that it is possible to be successful in life if one is willing to make some sacrifices and work hard. “As a general rule of thumb, if you come from an extremely wealthy family, you’re not likely to be as much of a leader as if you come from a lower income family or a middle-class family… Extreme wealth doesn’t usually produce people hungry for achievement, who want to strive for something. Generally, the great leaders of the world came from modest backgrounds.”

Rubenstein also advocates that integrity is an important leadership trait, saying good leaders should surround themselves with good people with a moral compass, and never take ethical shortcuts.

But he concluded there was a 13th quality: responding to crises. For David Rubenstein, the ability to rise to the occasion is the hallmark of a great leader.

“When you have a crisis, that’s when you have to show your real mettle and your ability. In my own view, the greatest American president was Abraham Lincoln, because he managed to hold the country together during the crisis of the Civil War. Franklin D. Roosevelt was not considered a great intellectual or a particularly important person until he became president. And then World War II broke out, where he rose up to be one of our greatest presidents.”

“When you’re in a crisis situation, you can show your abilities and if you rise to the occasion, I think you can become a great leader,” he responded to an FSPPM student on the question of leadership in times of crisis.

While discussing the attributes to successful leadership such as luck or intuition with our students, Rubenstein noted that those things do not come to them without doing anything.

According to Rubenstein, good leaders are humble because they realize they had a lot of luck along the way, and they did not succeed all by themselves.

“You can make your own luck,” he concluded.

He shared his thought that great leaders in the world have a certain kind of instinct, or gut reaction, or intuition; however, it comes about through experience. “Your own experience gives you an instinct that this is a good idea, or not a good idea,” he said.

Finally, what distinguishes a leader from a follower is vision, Rubenstein affirmed. A leader must have a vision to share with their followers of what he or she will lead them towards.