What’s it like to learn political communications from Chris Matthews?

In some ways, Vu Huy is a typical undergraduate student. Between classes and exams, you might find him playing competitive frisbee, working on a project for his internship, or catching up with friends over a bubble tea. But for ten days in March of 2021, he sat amongst giants.

Huy (class of 2023) was one of 30 Fulbright Vietnam students selected to participate in American Political Communications, an interactive virtual course taught by visiting professor Chris Matthews. 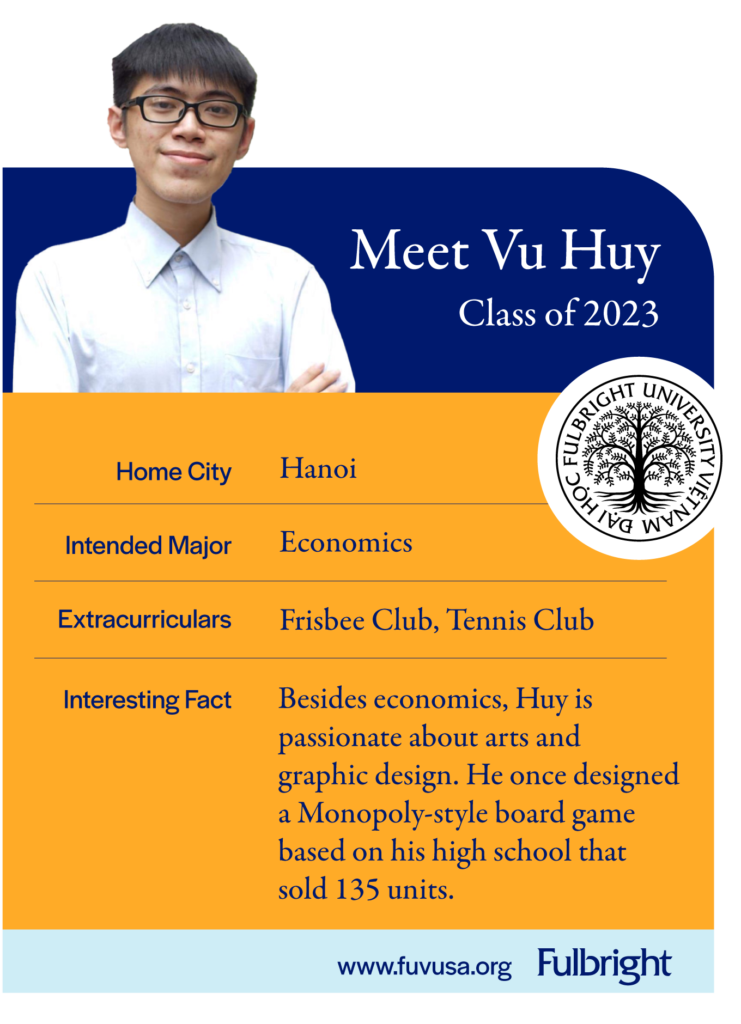 While the course first piqued Huy’s interest because the subject was new to Fulbright, his passion for economics and global geopolitics traces back to his high school years at Hanoi-Amsterdam High School for the Gifted. “There was a book called The Lexus and Olive Tree that addressed the globalization concept that completely hooked my mind,” he said.

He jumped at the opportunity to learn from Matthews, an award-winning journalist and primetime MSNBC anchor who, like Huy, once studied economics.

“I always want to know how the political communicators and experienced reporters tell the story, and their perspective on current issues,” he said. “I think it was coincident that I watched the series ‘House of Cards’ on Netflix.” “Experienced” would be a bit of an understatement to describe Matthews’ guest speaker lineup.

Throughout the course, Huy and his classmates had the chance to learn from and interact with some of the most influential journalists and political communicators in the U.S.—from cable news fixtures like Joe Scarborough to Michael Schmidt, who won two Pulitzer prizes in 2018.

And, yet, Huy said the classes felt more like intimate conversations than lectures, describing Matthews’ teaching style as both warm and enthusiastic. “The class feels like a warm, cozy coffee chat with his friend in his living room rather than being in a class with four walls,” he said. “He and guest speakers openly talked about their perspectives on every topic and encouraged students to raise questions.

By participating in these unfiltered conversations with distinguished communicators—some of whom had recently covered the 2020 election and Capitol insurrection of Jan. 6—Huy and his classmates had a unique window into a consequential time for U.S. democracy.

During the first course, Matthews unpacked the lessons of Jan. 6 along with American journalists Howard Fineman and Margaret Carlson. Huy posed the first question, asking about the potential consequences when political leaders in the US and around the world repeat demonstrably false or misleading information.

Huy and his classmates’ curiosity and engagement left an impression on Matthews. In a Washington Monthly op-ed, Matthews wrote: “A number of students said our lectures encouraged them to be more critical in their reading of the news, better able to avoid buying into conspiracy theories. If that’s some of what they took away, I’m glad. The students seemed genuinely open-minded about what worked in our system and what didn’t.”

Huy said he, too, has become a more avid consumer of political and world news following the course, regularly listening to podcasts like The Economist Radio, World Economic Forum, and Overseas Vietnamese.

This summer, Huy will intern for a real estate technology startup doing market research. “I choose to work there because there is a great opportunity for me to learn from the experienced co-founders who are studying at Harvard Business School and from an emerging industry in Vietnam,” he said.

After graduation, he plans to attend graduate school in the U.S. before pursuing a career in economics or public policy. “Fulbright has exposed me to another way of thinking, he said. “I would like to use that knowledge and experience to contribute back to Vietnam and the ASEAN bloc.”

While the American Political Communications course may have been Huy’s first opportunity to converse with household names in politics and media, it won’t be surprising if he one day joins their ranks.