Women like Sheryl Sandberg blazed the trail. In Vietnam, students like Quynh Anh are carrying the torch.

When given a chance to ask Sheryl Sandberg a question, Ninh Quynh Anh leaned in.

The student, who attended Fulbright Vietnam’s virtual “fireside chat” with Sandberg, was the first to ask a question during the event. She wanted to know which hard and soft skills had proven most beneficial to her career. Sandberg’s response? Communication and empathy.

Quynh Anh (Class of 2023) jumped at the opportunity to learn from the influential executive. “I had curiosity about technology and the participation of women and girls in the field,” she said. “Sheryl has an impressive career in technology and entrepreneurship. I hoped to hear some wise words from her as I navigate academics and post-graduation.” 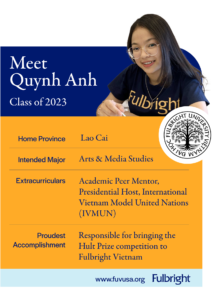 Hailing from the northern border province of Lao Cai, one of the poorest in Vietnam, Quynh Anh takes none of her opportunities for granted. The gifted student was accepted to several U.S. colleges before ultimately selecting Fulbright Vietnam, where she receives financial aid. “I wanted to have a world-class education that was affordable,” she said.

While she currently plans to major in arts and media studies, the idea of a liberal arts education appealed to Quynh Anh because of the opportunity to explore different areas before deciding on a career path. “Before Fulbright, I wouldn’t have thought I was an artistic person. I was more logical,” she said. “After one year, I felt like art was very close to life. I feel enlightened.”

Among the “wise words” Sandberg imparted during her talk were, “Roll up your sleeves and be willing to do the work. That’s how you will develop the hard skills to be tomorrow’s leaders.” With an impressive list of accomplishments under her belt and a keen entrepreneurial drive (not unlike Sandberg’s), Quynh Anh has been putting in the work for some time.

In her first year at the university, Quynh Anh was instrumental in bringing the prestigious Hult Prize competition to Fulbright. To compete for the Hult Prize, dubbed the “Nobel Prize for Students,” student groups develop innovative business ideas and work with mentors to fine-tune their products and pitches.

Quynh Anh delivered the opening remarks during the final round of pitches that year, before the winning team progressed to the Southeast Asia finals and placed in the top 6. That project, a vegan food delivery app called GreenTown, even caught the eye of investors and has raised money.

Thanks to Quynh Anh’s efforts coordinating a successful debut event and fostering a spirit of entrepreneurship, the Hult Prize competition promises to become a yearly tradition. In the second competition, held this academic year, students were challenged to develop ideas around the theme “Food for Good.” The winning Fulbright team, Còn Ngon (“Still Good”), developed an app to reduce food waste.

Despite all of the healthy competition on campus, Quynh Anh emphasized that the Fulbright community is tight-knit, and the atmosphere overwhelmingly supportive. “We’ve got a sense of passion because we’re the first generation of students at Fulbright,” she said, recalling how students go out of their way to support one another even during stressful times like finals.

She also credited the Fulbright faculty for fostering her success. “All of our faculty are very friendly and approachable,” she said. “We feel that our voices are heard and have all that we need to grow.”

Should you have the opportunity to visit Fulbright, you could hear about Quynh Anh’s experience firsthand. She currently represents the student body as a Presidential Host, supporting the president’s office by welcoming guests and giving tours. While she’s networked with many influential people in this role, from board members to visiting dignitaries, there is one she’s still hoping to meet.

“My greatest dream is to invite Michelle Obama,” she said. “I’m touched by her story because of her experience as someone in a minority group and her identity as a girl. She had to always try to define herself and prove that she is worth it, that she’s enough. The whole journey is very inspirational. I believe that for a girl like me, coming from a small province outside of the big city in Vietnam, and still trying to navigate my way in life, it would be a very valuable chance.”