An inside look at the university’s origins, innovative educational approach, and what the next five years could hold 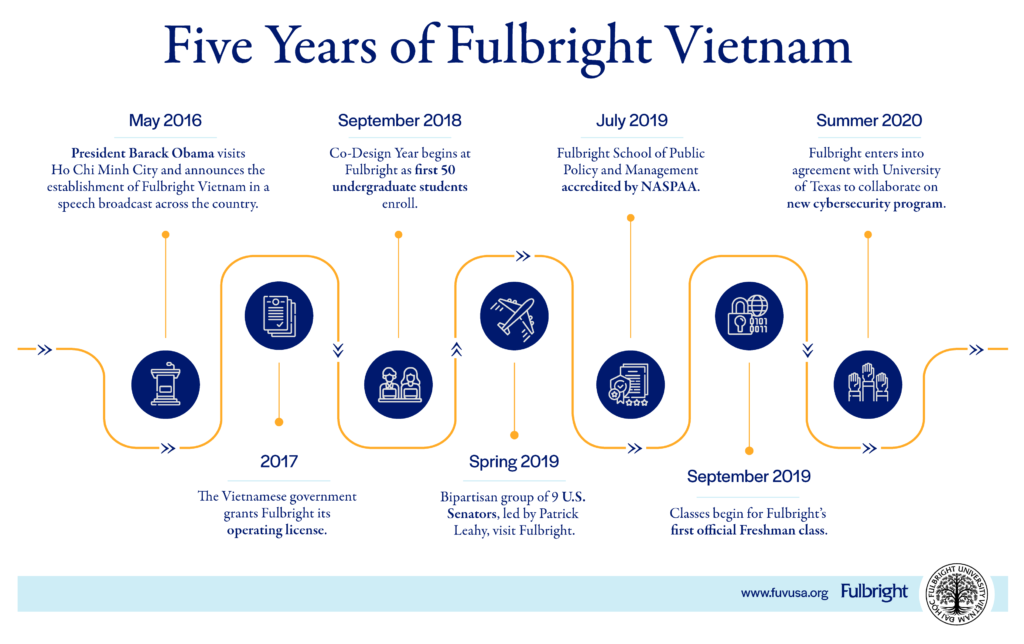 On May 24, 2016, a vision that once felt like a lofty dream became quite real: the establishment of Fulbright University Vietnam, the country’s first independent, nonprofit university, was being announced by the President of the United States.

The announcement during President Barack Obama’s Hanoi visit is seen as “Day 1” for Fulbright University Vietnam, now celebrating its fifth anniversary. While the commencement was indeed a grand occasion, Fulbright’s real origin story resembles that of an ambitious start-up fueled by ideas, passion, and plenty of grit.

Fulbright’s President Dam Bich Thuy was running an international bank in Vietnam when she began conversations with Tom Vallely and Ben Wilkinson about the vital importance of higher education for Vietnam’s future.

At that time, Tom and Ben held leadership positions at the Vietnam Program at the Harvard Kennedy School’s Ash Center for Demcoratic Governance and Innovation. The Vietnam Program operated the Fulbright Economics Teaching Program (FETP), a center of economics and public policy teaching and research founded by the Vietnam Program in 1994 and funded primarily by the State Department’s Bureau of Educational and Cultural Affairs.

“We spent time chatting about the economy, how the financial sector was performing,” said President Thuy, a Fulbright scholar herself. “We started talking about our dream that one day Vietnam could have the kind of U.S.-style college that I came to admire.”

Ben, who currently serves as Fulbright University Vietnam, USA’s Executive Director, was eager to build upon FETP’s growing influence and momentum. “Around the time we incorporated the 501(c)(3) [formerly the Trust for University Innovation in Vietnam, now Fulbright University Vietnam USA] in 2012, we began a dialogue about how to take FETP to the next level,” he said. “The idea that was most exciting was to see if we could make the public policy school the nucleus of a standalone university.”

The idea quickly gained traction. “One day, I got the news that the government was serious about giving us a license and approving the idea,” President Thuy recounted. “That was when Tommy said, ‘Go and set it up.'”

An Unprecedented Challenge (and Opportunity)

Fulbright’s founding team, including Tom, Thuy, and Ben, operated like a small task force. History was being made as they developed a vision for the academic programs, sought the support of the U.S. and Vietnamese governments, and laid the groundwork for a successful launch. It was a start-up atmosphere in many respects. “Our first office was in a one-bedroom apartment in Harvard Square,” Ben fondly recalled.

The work wasn’t always glamorous. “It was amazing, but at the same time, the amount of work involved in setting up a university was much more than setting up a company,” said President Thuy. “I really miss the days where we had to do everything—printing the documents, making photocopies.”

There was no playbook, or any modern precedent, for building a liberal arts university in Vietnam. But President Thuy saw that as an advantage. To her, replicating older models would have been a wasted opportunity. “No master chef actually cooks according to a cookbook,” she would later tell the TEDx Hanoi audience.

The team embarked on a road trip of sorts, visiting many colleges and universities in the US to shape the new university’s values and principles. It was during a snowy winter’s drive from Boston to New Hampshire for a meeting at Dartmouth College that Thuy and Ben sketched out the university’s first mission and vision statement.

Then there was the debate over what to name the university. “At the beginning, the Americans who were involved felt that the university’s name should reflect its Vietnamese identity,” said Ben. “In fact it was the Vietnamese stakeholders who championed the name Fulbright which in Vietnam was closely associated with principles like academic excellence and meritocracy. So that’s how a Vietnamese university came to be named for an American senator from Arkansas.”

In 2016, the Harvard Kennedy School formally transitioned responsibility for the Fulbright Economics Teaching Program to Fulbright University Vietnam. FETP was rechristened “the Fulbright School of Public Policy and Management.”

Undergraduate education had always been an important component of Fulbright’s vision and value proposition, and in September 2018, the university launched the Co-Design Year, which Ben described as the undergraduate program’s “prototype year.”

During the Co-Design Year, a founding cohort of faculty and 50 students (“co-designers”) experimented with innovative curricula and teaching methodologies, embracing a spirit of continuous iteration and design thinking. It was a year of challenges.

President Thuy recalled one such challenge, when the original Rhetoric course curriculum wasn’t sitting well with the Vietnamese students. “We have professors who brought in the programs and syllabus from America. The students all said, ‘No, it doesn’t work for Asian people. We don’t argue this way. It’s too Western.'”

The faculty and students then worked together to re-imagine the syllabus through the filter of Vietnamese culture—a process that, though painful at times, inspired new ways of thinking even beyond Fulbright’s walls. “We showed the syllabus to professors in other countries, and they got a pleasant surprise because the idea of trying to change Rhetoric in an Asian way had never been thought about,” said President Thuy.

Fulbright welcomed its first official freshman class in 2019, with co-design at the heart of its educational approach. “The university tends to be a pretty static type of institution: same books, same professors, same classroom,” said President Thuy. “We had the advantage of being created recently when the world is changing so much.”

This agile mindset proved particularly advantageous in 2020, when COVID-19 forced educational institutions everywhere to transition to remote learning. “We moved online pretty quickly and seamlessly,” President Thuy said. Still, she added, students were anxious to return to normal. “Not all students enjoyed studying online because we’re one of the only residential colleges in Vietnam. Students enjoyed that face-to-face interaction.”

Building a Future-Ready University and Workforce in Vietnam

Fulbright remains committed to its founding mission. According to President Thuy: “The core mission is still to try to help the young generation of Vietnam, and to equip them with skills and knowledge so they can serve the region and the world at the best capacity.”

In keeping with its public policy roots, Fulbright is determined to engage with grand challenges facing Vietnam and the world including the existential threat posed by climate change.

“It is impossible to overstate the scale of Vietnam’s climate challenge,” said Ben. “For example, as the Mekong Delta’s agro-ecosystem is degraded by sea-level rise and other climate effects, we’re seeing an increase in the numbers of people who are leaving the Delta for the Ho Chi Minh City area in search of livelihoods. Trends like these will put unprecedented strain on the city’s hard and soft infrastructure.”

Another challenge that’s come into focus is cybersecurity. “Like the U.S., Vietnam is vulnerable to cyber attacks,” Ben said. “We plan to launch a defensive cybersecurity initiative in collaboration with the University of Texas System.”

Looking Ahead: the Next Five Years and Beyond

Fulbright initially operated from an office tower in Ho Chi Minh City’s District 1 and currently occupies space in the Phu My Hung neighborhood of District 7. The university is focused on building the first phase of its permanent campus in the Saigon High Tech Park (District 9) on a site donated by the Vietnamese government. Once the first phase is complete,  President Thuy projects the student body will grow to around 1,800.

In 2023, Fulbright’s founding freshman class will graduate; the next five years will see three total graduating classes. “I want to see these three classes sent off with a bang in terms of jobs they’ll get or studies they want to pursue,” said President Thuy.

From there, Fulbright’s ambitions are even more audacious.

“People ask, ‘Are you going to focus on serving Vietnam or are you going to be more ambitious and make it more international?'” President Thuy said. “In the long term, we want to be competitive internationally, drawing top students from around the world even as we remain committed to our mission of service to Vietnamese society.”

“We want Fulbright to become a Vietnamese apex research university with a global reputation,” Ben asserts.