Each summer, young scholars from around the globe convene to conduct and showcase original research for Stanford School of Medicine’s Center for Asian Health Research and Education (CARE). This year, a Fulbright University Vietnam student was among them.

Nguyen Huu Phuc Ngan, class of 2023, was selected to participate in the Stanford CARE Scholars Program—an immersive 9-week summer course that aims to develop aspiring researchers while mining valuable data and insights to improve the health of Asians everywhere.

Ngan first learned about the opportunity from an email from Fulbright’s career development team. “I was looking for basically any research opportunities,” she said. “It’s difficult to do that here. It can be difficult when you are an international student from a developing country.”

But Ngan’s professors were quick to vouch for her. Thanks to her stellar academic performance, passion for research, and Fulbright Board member and philanthropist Cuong Do (who covered her program tuition), she became one of the 23 Stanford CARE Scholars in 2021.

From the ‘other side of Saigon’ to Stanford 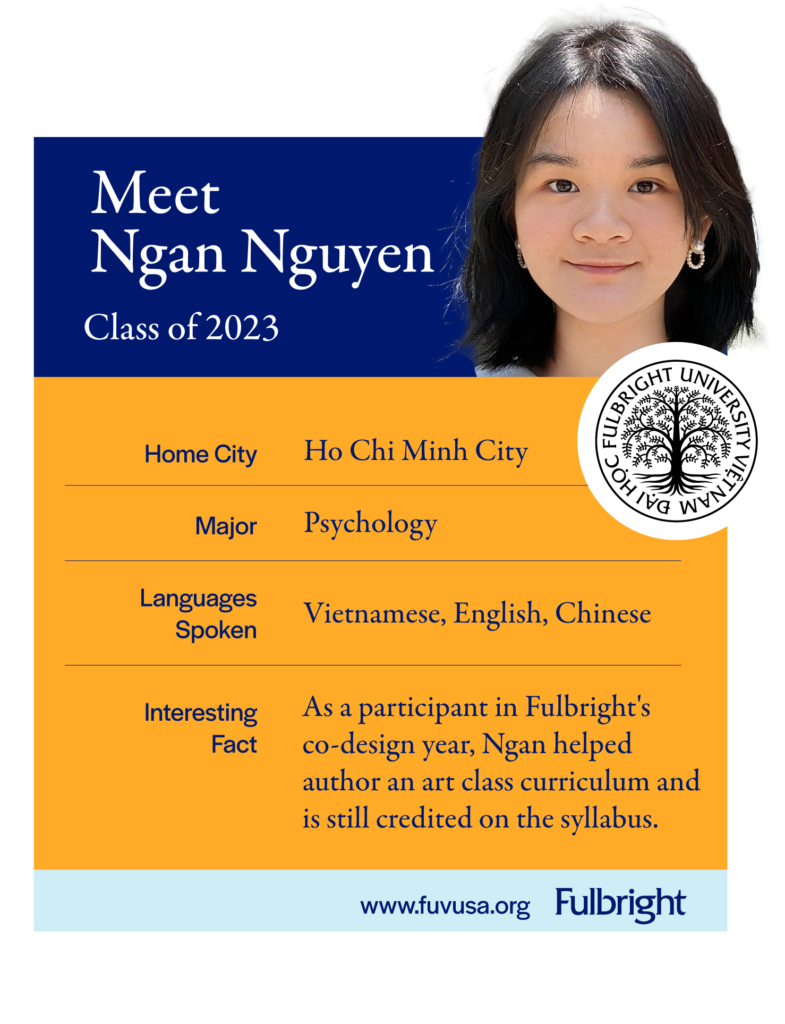 Ngan grew up close to campus in Ho Chi Minh city—but not the part of the big city that springs to mind for most people. “I didn’t grow up on the rich side,” she said. “I experienced a different side of Saigon than what people see.

As Ngan and her family moved from place to place seeking work, she began to develop an interest in mental health and showed an early aptitude for research.

“Growing up, I would have friends who said they felt lazy and wouldn’t perform well on tests,” she said. “It was strange because they didn’t know why they felt lazy, and they’d get reprimanded for that. I was curious about this, and later I found out that they had depression.”

A psychology major entering her junior year at Fulbright, Ngan has had the opportunity to broaden her horizons and build meaningful relationships with other scholars who have walked in her shoes. One psychology professor, in particular, has made an impression on her.

“I talked to her about how she got here, her challenges,” Ngan said. “It wasn’t a straight path. She spent time exploring the world and working with different populations. She found out what she truly wanted to do before choosing what degree to get.”

After completing several course-embedded research studies at Fulbright—with topics ranging from COVID-19’s impact on students to the physical, cognitive, and socio-psychological developments of a female Vietnam War veteran—Ngan discovered that she was interested in studying the interplay between psychotherapy and medical treatment and helping underserved populations. The Stanford CARE Scholars program was the perfect place to start.

One project, where the team worked with two mentors from Stanford School of Medicine, looked at the association between immigrant density and health outcomes in American neighborhoods using data from 32,000 U.S. ZIP codes. That study found that as immigrant density increased, diabetes, obesity, and low physical activity decreased. 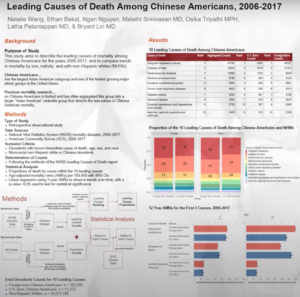 At the end of the 9-week program, Ngan and her team presented their findings at the CARE Summer Research Symposium. Although this experience was a first for Ngan, she approached it with confidence.

“I wasn’t nervous at all because I expected it to go really well,” she said. “We had run through the presentation a hundred times.”

Next, the group will work on submitting their work to peer-reviewed journals for publication.

Big dreams for a better (and healthier) Vietnam

“Mental health issues aren’t talked about much in the country,” said Ngan. “My friends have such a difficult time finding support for that. If you look up therapists in Vietnam, you’ll run into a lot of scams and people who have no qualifications.”

The quality mental health support that does exist in Vietnam is often expensive and out of reach for many people. Ngan aims to change that.

“There is a need for mental health support system-wide,” she said. “Not just self-help books.”

After graduation, Ngan hopes to get into a “good program” to continue her research. Ultimately she dreams of practicing psychology in a hospital system, where mental health services often fall short of the need.

Besides impacting patients’ lives and well-being, Ngan wants to change her country for the better.

“My big dream is to get the government to support mental health with concrete policies and efficient fundings,” she said.

With a donation to Fulbright Forward, You can help open doors to students like Ngan across Vietnam.  Give Today >